John Jackson was born in 1924 in Rappahannock County, VA to a tenant farming family who was also extremely musically talented. He was the seventh of fourteen children, and they all played some combination of guitar, banjo, ukulele, mandolin, harmonica, accordion, autoharp, and even homemade penny whistles. John’s father was well known in the area and traveled around the county to parties and dances, playing the blues, old mountain songs, and other regional music. His mother, however, didn’t sing the blues. She played and sang spiritual songs.

Rural agricultural life during this time wasn't easy, and evening and weekend gatherings for music and dance were a common occurrence, a time to enjoy a slower pace with a faster beat. In the Jackson household, sharing songs and music before bed was a nightly ritual. John would have been exposed to these sounds from the time that he was in the womb, and they stayed with him throughout his life, creating a lifelong passion and legacy.

John’s father was left handed, and played the guitar in an upside down position that John found impossible to learn. But that didn’t stop him, he began playing with his father’s guitar when he was four, soaking up the musical influences around him. John’s older sister purchased a $3.75 catalog guitar for him when he was nine years old and it went with him everywhere.

John stumbled upon one of his greatest music teachers one day when he heard a loud clanging sound and followed his childlike curiosity to the family spring where he met a chained convict named Happy, who also just happened to be a musical prodigy. Once it was established that John’s father owned a guitar and that John was willing to stealthily bring it down to the spring, thus began a month-long series of guitar lessons, Happy playing a song each time he came to the spring for water. When John’s mother heard the music, she invited Happy to join them for dinner, which led to a year or two of evening music gatherings and lessons. John describes Happy as truly the happiest man you ever saw and an amazing guitarist who inspired one talented local musician to cry like a baby and smash his guitar over a rock, refusing to play again. That must have been some serious talent!

Another influential source of music came into John’s life through a couple of traveling furniture salesmen who were trying to peddle a record player. John’s father sent them away, saying they didn’t have any money to buy anything. But when they came back after lunch with a decidedly better marketing tactic--a record playing some music, John’s mother heard it and exclaimed over it, ordering them to bring it on in the house. The salesmen would bring several records a month, the Jackson family paying what they could towards it. John’s older sisters would use their earnings to buy records, and he would listen to them over and over and over until he had learned to play them.

John Jackson’s dedication to music led him to follow in his father’s footsteps, traveling to perform at house parties within walking distance (think 20 miles!!) of his home. But music was something reserved for evenings and weekends, John was a hard-working man who always had multiple jobs that paid the bills, which included working as a cook, butler, chauffeur, general caretaker, and even a gravedigger. By this time, John’s father had passed away, and John had married Cora Lee Carter. He was an active performer at area parties until his life was threatened one night and the incident led to a burst of violence that left the house in shambles, and John convinced that music inspired violent behavior. (His guitar had been previously broken and thrown into a river at an earlier event where his brother was performing.) John narrowly escaped, along with his young wife and guitar, and he vowed to stop playing, retiring from public performances for nearly 20 years.

A bizarre string of coincidences involving children, Elvis Presley, a mailman, a gas station, and a wandering folklorist led to Jackson’s worldwide fame. After nearly two decades of neglect, John’s guitar once again saw the light of day because his children and their friends wanted to mimic a dance showcased by Elvis Presley and they required accompaniment. It was at that precise moment that the mailman’s route led him to his stop at the Jackson home. Upon hearing the very song that he had been trying to learn, unsuccessfully thus far, he pleaded with John to teach him and didn’t let up until Jackson agreed to give him a lesson in the back room of the gas station where he worked a second job. During that lesson, a man heavily involved in the movement to preserve the unwritten folk music from around the state, just happened to stop at that particular gas station, on that particular day, to get gas. But rather than getting gas, he excitedly followed the music and begged some songs out of a very skeptical John Jackson.

Chuck Perdue, the wandering folklorist, proceeded to introduce Jackson to some of the musical giants that inspired his talent, and to help him become thoroughly successful on the folk circuit both at home and around the world. Jackson became one of the most beloved folk musicians, and charmed audiences for the next 30 years with his sweet Appalachian drawl, gentle manner, and vibrant sense of humor. He was more than a bluesman, he was a true songster whose abilities and repertoire spanned the genres of ragtime, blues, country, and gospel music.

It’s been said that Jackson was “discovered” by Chuck Perdue at that gas station in 1964. But Jackson didn’t need to be discovered. He knew exactly who he was. He loved music, but not violence. He worked hard, using his strength and dedication to maintain the jobs that would provide for his family. He allowed children to coax music back into his life and it was his generosity that led him to that fateful gas station guitar lesson. His gentle nature and humor spanned the divisions of race, gender, socioeconomic status, and time. It could easily be said that he was from a different era, that he carried the very best of that era within him as he traveled the world and shared his extensive gift of song and storytelling.

John Jackson received the National Heritage Fellowship in 1986 from the National Endowment for the Arts, which is America’s highest honor in the folk music world. Jackson performed for Presidents Jimmy Carter and Ronald Reagan, the US Congress, many European heads of state, and in Carnegie and Royal Albert Hall. He played with famous musicians such as B.B. King, Eric Clapton, Bob Dylan, Bonnie Raitt, and Ricky Scaggs. Yet he remains almost wholly unknown in Rappahannock County, the place where his story began.

Eldon Farms was happy to be part of bringing his legacy to light by hosting the first John Jackson Festival. He wanted to be remembered as a blues musician and songster. We were honored to help fulfill that wish when hundreds of people from near and far joined us for an evening paying tribute to his life and music.

From history to community to bovine genetics to bird boxes to private hunting, you never know what will pop up in our feed next. Stay up to date with all things Eldon by following, liking, or subscribing to our channels below. 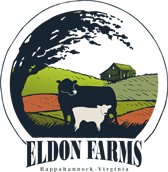 Set among the rolling hills of Rappahannock County in Northern Virginia.